Look at my hands. If I don’t work, it’s like I don’t exist

Two cabbages appeared on Annaelle’s desk. She called me downstairs to investigate. Large, healthy plants, I took the cabbages in my hands and examined them. A client named Papa Moïse had brought them in along with several photos to leave with Annaelle, his former loan officer at HOPE Congo. He was afraid she wouldn’t believe that he had really become a successful farmer; which is not so difficult to understand when you realize there are hardly any farmers in the Republic of Congo (Congo).

It’s something I have noticed about our clients in particular. With over 6,000 clients, I’ve admittedly spoken with a very small percentage. Even so, the majority of HOPE Congo’s clients are engaged in commerce- buying and selling items from clothing to SIM cards and onions. Note the onions. Congo is an incredibly fertile country. All you have to do is drive around to see the green covering this land like a thick blanket. Yet out of the country’s ten million hectares of arable land (1/3 of Congo), only 2% is currently cultivated. This means that the vast majority of food is imported. According to the World Food Programme, that figure is 70% of all consumed food, from grains to meat and fruit. This has an enormous impact on daily life. 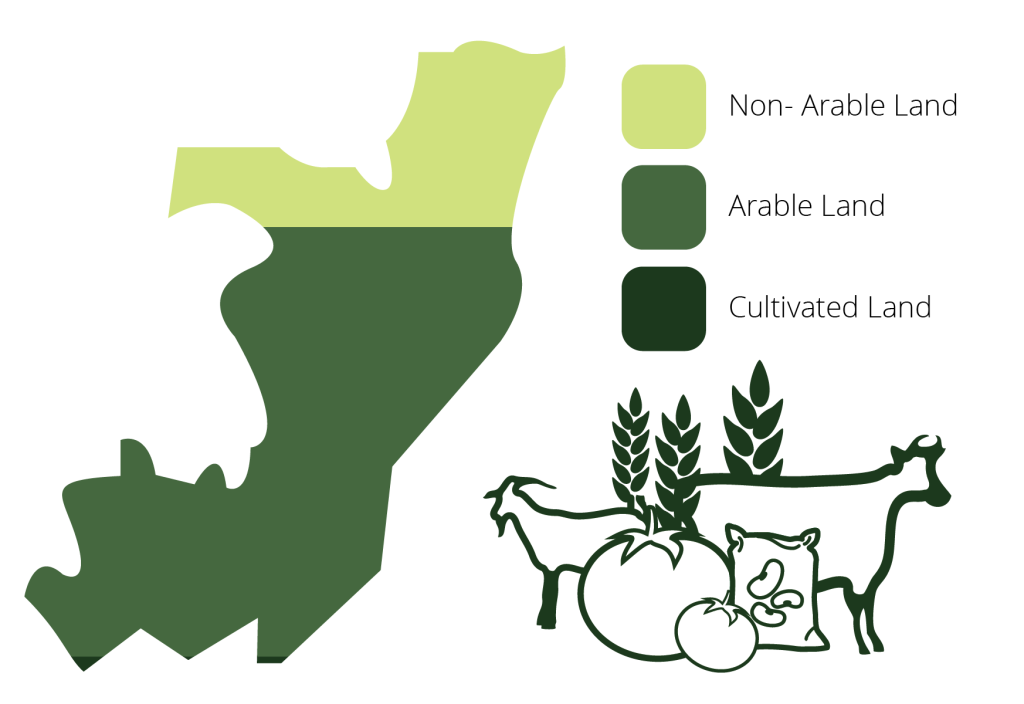 First of all it means that food is expensive. What families can afford to feed their children is limited and dominated by cassava and tubers that are grown in country, which are mostly full of carbohydrates. Remember the onions? The onions, like most other fruits, vegetables and livestock products come from outside of Congo. Trucks full of onions are a common sight in Brazzaville. This dependency on foreign exports also poses the problem of self-sufficiency, something I personally experienced last spring. When the relations between Brazzaville and Kinshasa (DRC) became politically tense, it meant that trade across the Congo River halted. One of the small effects on daily life in Brazzaville was that all of the eggs in the city suddenly disappeared. For several weeks, search as you might in the markets, there were simply no eggs to be found. The reason: all our eggs come from Kinshasa. So it is no surprise that Papa Moïse is concerned for his country’s well being – nor that he wants to start raising chickens again. 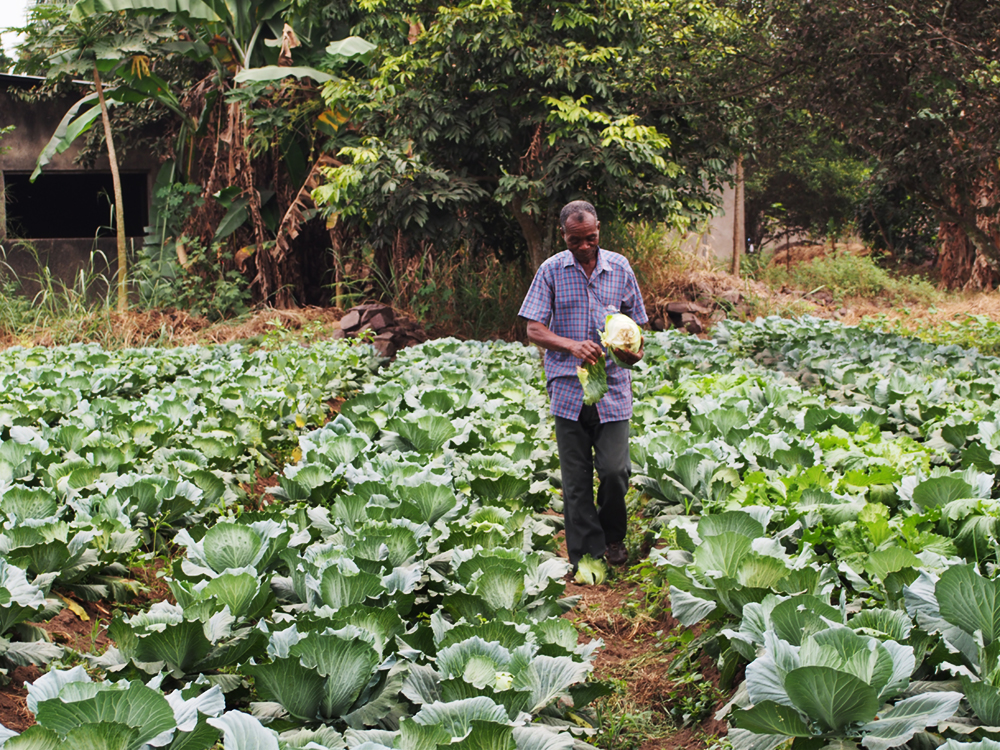 With such fertile land, and so many consequences from having to import food, why aren’t there more farmers in Congo? After spending a day walking Papa Moïse’s farm, I learned that most of it comes down to passion and means. For Papa Moïse, farming is not only what he studied at school, it’s also a vocation. Moïse says that, “When I see my population becoming poor and struggling, I am not happy… I come from a poor family, so I want even the poorest families to at least have the ability to buy one egg. All that is to say that for me, raising chickens and having a farm, it’s very much a calling.”

Farming is hard work, requiring planning and lots of labor to succeeded – that is another reason it is not quite so popular in Congo. Moïse’s previous attempts to form a cooperative failed simply because people were not interested in putting in the time and effort before they could see the fruits of their labor. Part of this is a cultural perception; the most esteemed jobs in Congo-Brazzaville are those where you dress in a suit and tie to work in an office all day. To many, the general perception is that farming is a step backwards, less distinguished and far too much work. Here, one has to have passion like Moïse to pursue farming. 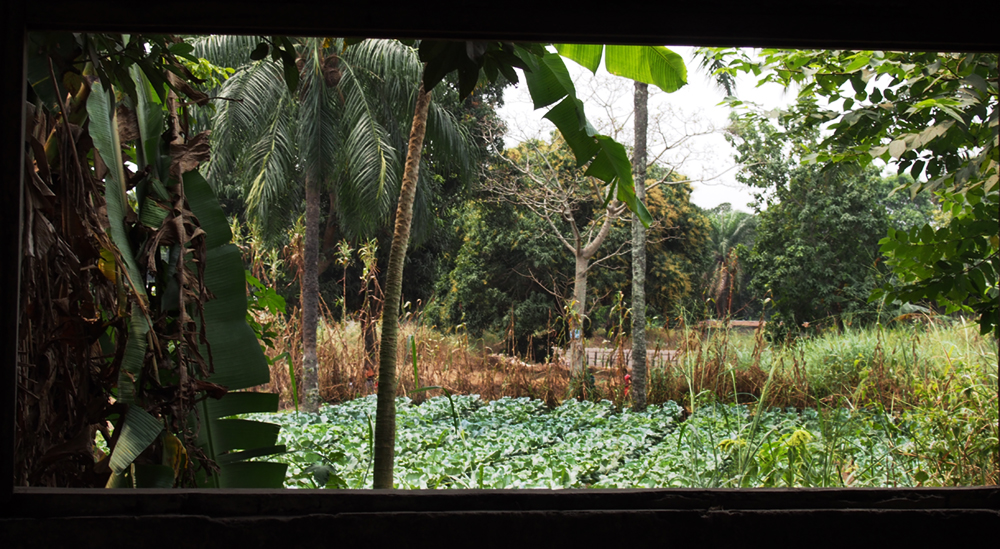 The second problem facing Congo’s would-be farmers is having the means. Profitable farming requires large initial costs, from buying land, to seed, machines, fertilizer and labor. Despite this, there is no support from the government, and no infrastructure. As Moïse explains, “There are no subsidies. Agriculture requires a lot of materials. And since they’re not subsidized, it’s difficult.” With no support, and little way to have the savings for the initial costs, it soon becomes clear why Annaelle was skeptical about Moïse’s cabbage patch.

When I visited Moïse’s farm, it was beautiful. He joined HOPE in October 2013 and is currently on his fourth loan. We passed spinach plants, endive seedlings and sorghum stalks drying on the wall before coming to his pride and joy: a field full of green leafy cabbage. “My loan of $600? There are the profits!” He said, sweeping his arms to encompass the entire field. Moïse’s enthusiasm for farming and his vision for creating a Congo overflowing with produce shone through his voice and the tender way he handled his plants.

“Look at my hands,” he told me. I looked down as he held them out to me- callused and lined from years of working the fields and darkened by the sun. Farmer’s hands. A simple gold wedding band encircled his left ring finger. “If I don’t work,” he continued, “It’s like I don’t exist.” This life working the land is everything to Moïse. While the infrastructure is still lacking, it was beautiful to see a small part of Moïse’s dreams for his country be realized in that field. It is a labor of love, and his hands tell the story. 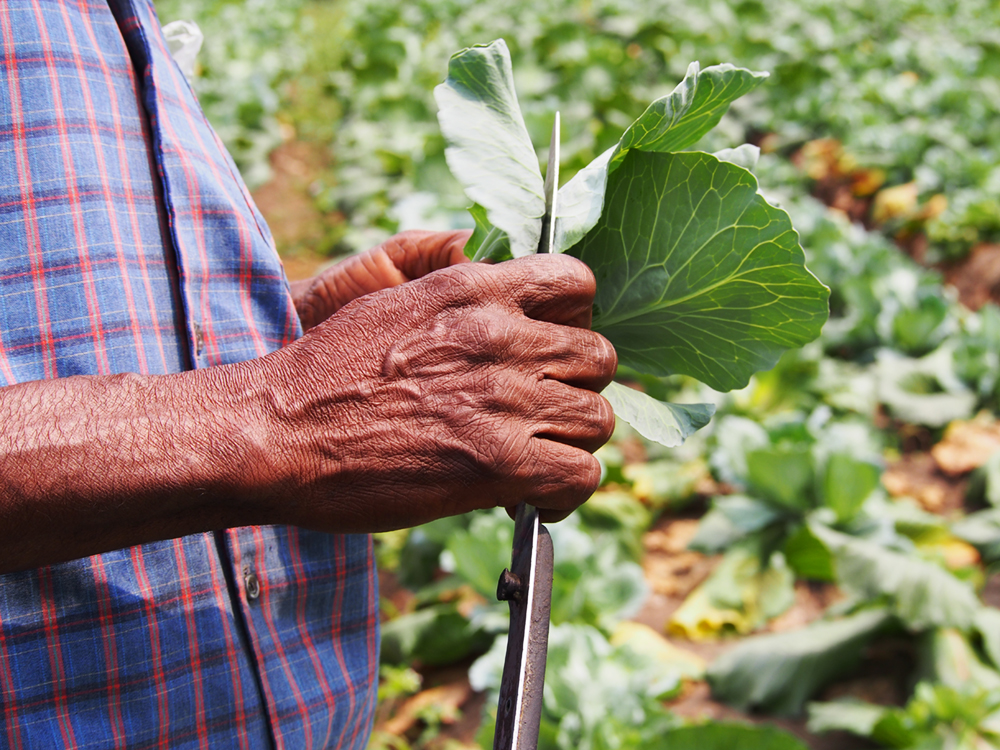 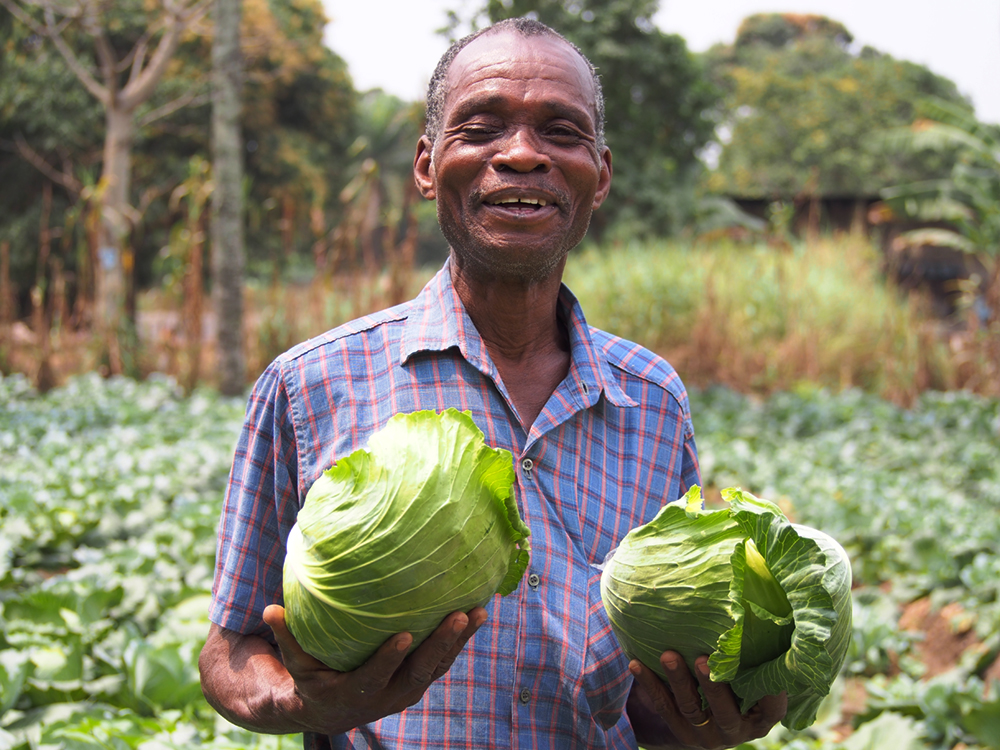 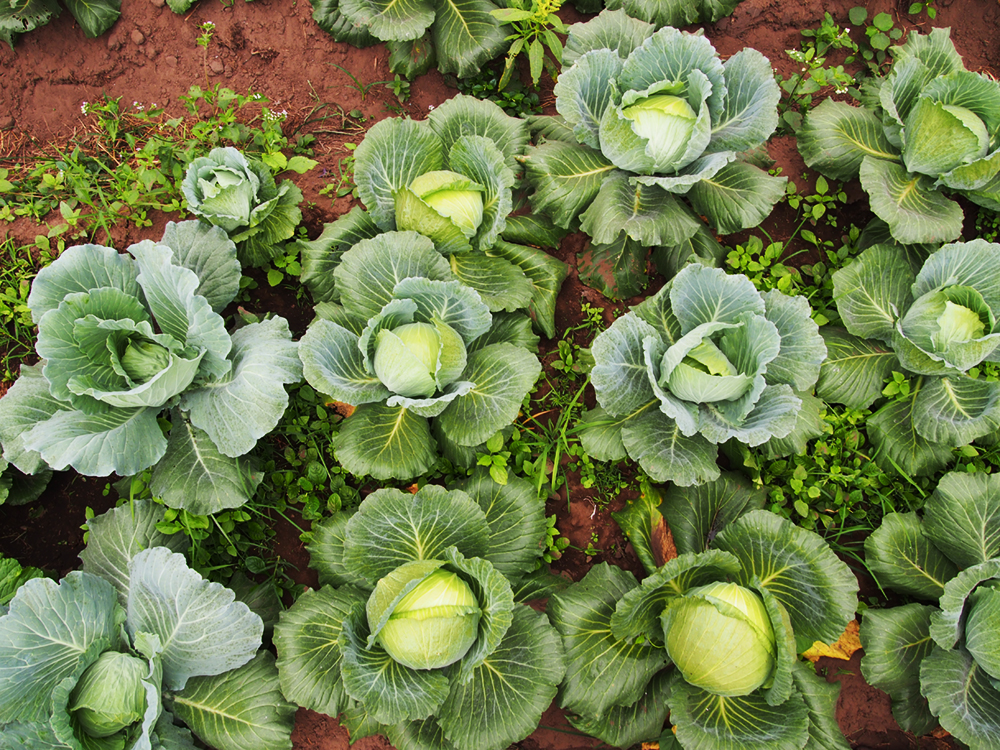 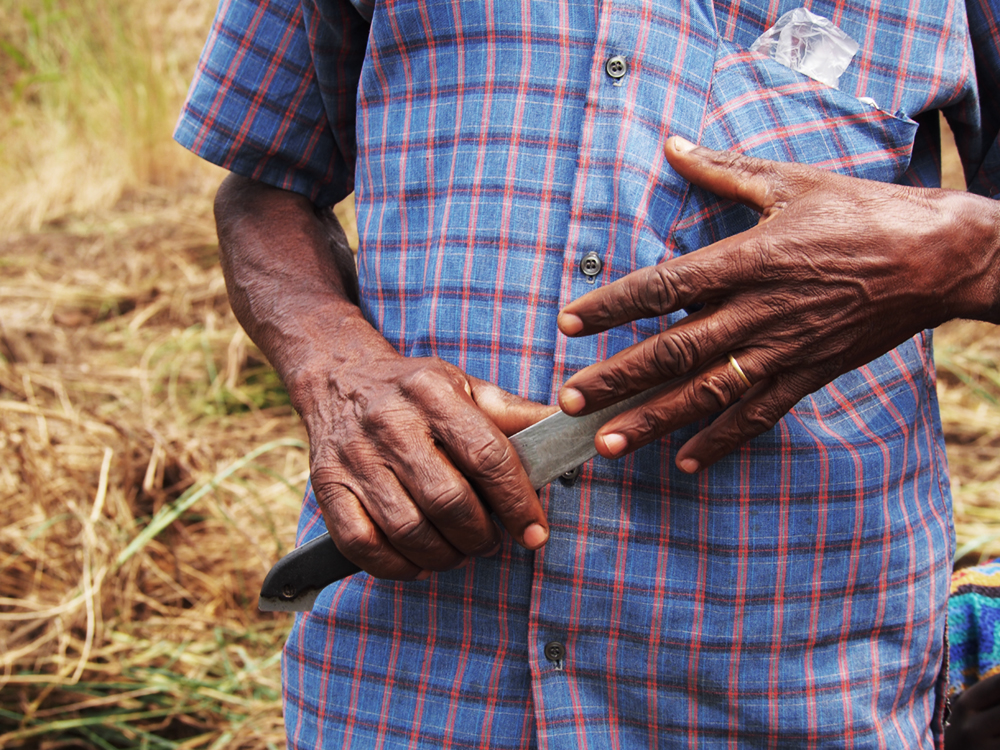 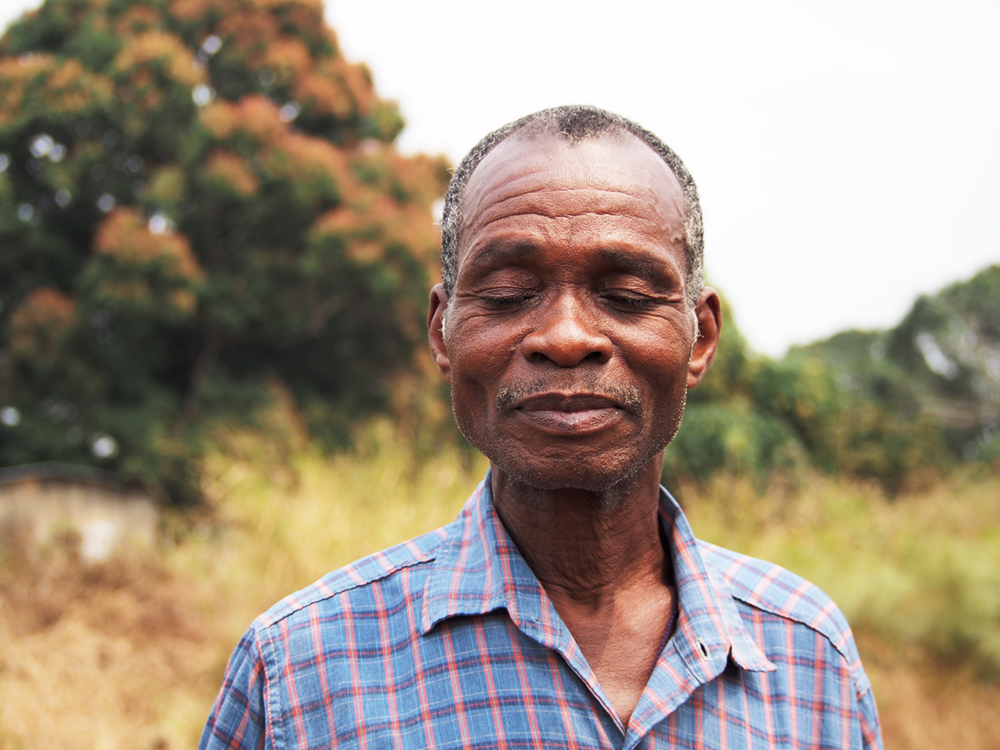